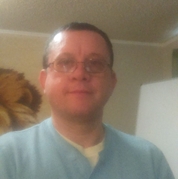 Shirts Across America sends volunteers from the West Coast to New Orleans and Mississippi as part of an ongoing program to help build hurricane-affected areas. They have been sending students to the region for many years, working with nonprofits along the Gulf Coast. This year, some of their students came to build with NOAHH. Like many student groups, some parents came along to help volunteer as well. Among them were Seattle high school student Cullen Hege and his father, Keith.

“I found out about Shirts Across America at school last year,” Cullen explained. “My teacher was in charge of the club. He told me a little bit about the organization. I knew I would really like tod ot his, so I signed up. I got into the trip when I came last year. I liked it. This year, I’m on the core team. I’m coming back in the summer because of how much I enjoyed it.”

Last year, he worked with tornado relief efforts. Helping local homeowners made an impact on him.

For Cullen, it’s a learning experience.

“We learned about the process of getting a house through Habitat, and we found out that some of the homeowners which we worked with have gone through three hurricanes and a tornado, and they still call this place home,” he said.

His dad added, “We also met Ruby Bridges on our first night here. She was one of the first children who helped integrate the schools. She was in a school by herself. She talked about her experiences. A phenomenal lady. Shirts Across America has done a great job with both cultural as well as other educational pieces for the kids.”

The trip has also served as a chance for Cullen and his dad to bond.

“For just the one week, we get to work together and catch up on how things are going,” Cullen said.

“From my perspective, it’s great to be able to see how hard Cullen works,” Keith said. “It’s great bonding time for the two of us. Cullen has siblings at home, so he doesn’t get as much one-on-one time with me.”

The family had come down before to help on the Gulf Coast shortly after Hurricane Katrina. Back then, they were living in Tennessee. They only got to part of Mississippi before they stopped to help with the recovery efforts, but in subsequent years, they came to New Orleans as well.

“We worked with a group from our church,” Keith explained. “Then we came back six months later, almost a year after Katrina, the whole family did. I was surprised there was still work that needed to be done here. It was unbelievable in Mississippi. Wee did as much as we possibly could and removed a lot of debris. A year later, we were putting drywall up in some of those same homes.”

Their hard work has given them perspective on what it means to be home.

“For me, it’s a place to relax,” said Keith, “to be able to share the day’s or week’s stories, find out from them where they’re at. It’s a support structure. It’s just great to be able to have a group of people who share in your pains and sufferings as well as your joys and elations.”