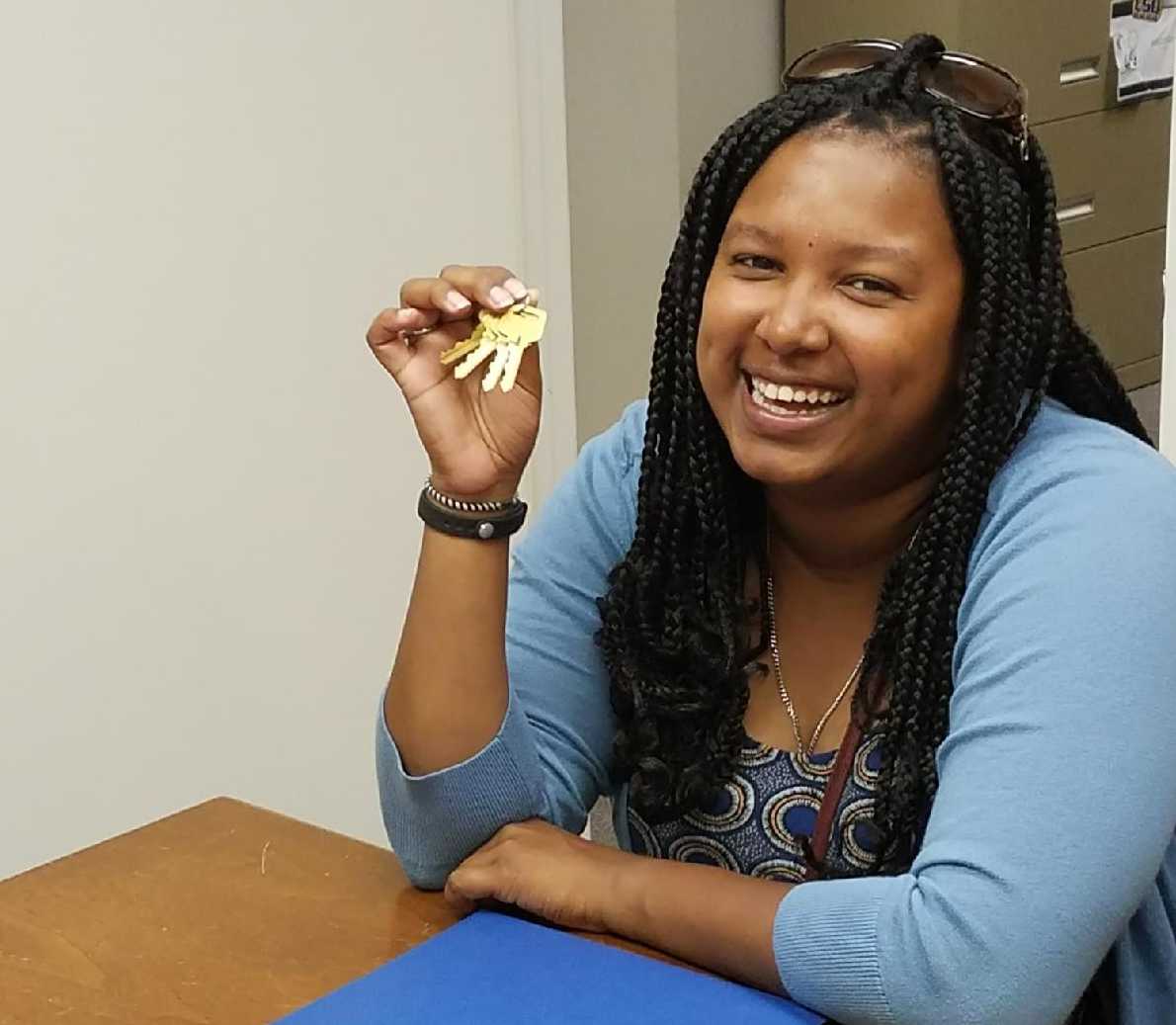 Whitney Jett is a NOAHH partner family who started her partnership in June 2016. NOAHH will be following her story through the entire partnership and hopefully beyond. Part 3 is about her application process, including her intake meeting, stage 2 documentation, home visit, and partnership meeting. Click for part 1 and part 2.

It was a short phone call. She spoke with someone, giving a few details about her situation, and then scheduled an appointment with her case manager, Emily. All NOAHH partner families have a case manager who guides them through every step of the program, from the application to the closing. There are four main steps of the application process: the intake meeting, the stage 2 paperwork, the home visit, and the partnership meeting. On the advice of Habitat homeowner Tamika Kennedy, Whitney came prepared for the first meeting, bringing all of the documents she could, which allowed her to move the stage 2 paperwork faster—most of what NOAHH needed had been provided at the intake. Though she was anxious at the intake meeting, Whitney found it much easier than she expected.

“Pretty much from the moment I walked in the door, everybody was so inviting,” she said. “They were excited that I was there wanting to [apply] for the program, especially Emily. Emily was so excited to meet me. I was excited to meet her. We were both just sitting there, just bubbling over.”

Emily and Whitney discussed her financial situation and documents, and Emily gave Whitney a program overview. Once it was determined what more Whitney needed to bring in, she moved on to stage 2.

After dropping off the last few pieces of information she needed to complete her stage 2 paperwork, Whitney’s file was taken to the Family Selection Committee. Every Thursday, members of NOAHH’s staff meet to review applicants for the homeownership program. Applicants are accepted based on three criteria: the ability to pay, the need for shelter, and the willingness to partner. The first time the applicant’s file is presented to the committee, their ability to pay is analyzed, and if they are approved, they move on to a home visit. If there are questions or concerns, their case manager reaches out to them and lets them know. The committee almost never denies an applicant without giving suggestions or action items on how they can meet qualifications. If they don’t have the ability to pay now, NOAHH offers guidance on how to stabilize their financial situation–clear up debt, save money, or build employment or rental history. Whitney, however, was approved right away for a home visit.

Whitney received the home visit approval notification while at work, prompting a few surprised reactions as she celebrated the news. “Especially when I got down to the zero percent interest and sweat equity instead of a down payment part. My manager hit me on the arm.”

At the home visit, NOAHH staff reviews the current living space of each applicant to see if they have a need for shelter, which is based on a list of different factors including the physical state of the home, whether it is overcrowded, the monthly housing costs being over 30% of income, and more. In Whitney’s case, she was living with her parents in a small space that was temporary and frequently over-crowded. A review of her home showed she met the qualifications for need for shelter.

“I was a little concerned because I live in a decent house. Are they gonna think that I actually need a house? Are they gonna say, ‘Oh, she’s fine. Turn it down.’ I didn’t really know what it was gonna be, and I didn’t know what you guys were expecting. It’s not really a need for shelter like I’m living in a hut somewhere in the middle of the woods. I just need my own space. You know me and my mom, butting heads or too many visitors in the house. I just want my peace and quiet.”

The visit was late on a Friday afternoon, and Whitney’s parents were present. During the visit, Emily explained the program once more and discussed with Whitney her plans to meet each requirement of the program. Then, the home was toured and her needs evaluated.

“I wanted [mom] to be there so it’s not just me and some strangers she hasn’t met,” Whitney said. “Now she gets to meet y’all, too. It made it a lot easier for her to actually be there for it. Afterward, we all looked at each other thinking ‘all right. That was simple. That was quick.’ It was a short visit. I wasn’t sitting there for hours trying to figure out things. It was to the point. I was glad that [mom and stepdad] got to put in their input during the interview. We just took a deep breath and said, ‘All right. What’s next?'”

Over the next week, Whitney waited for her file to go back to the selection committee for final approval. It was quickly approved by the committee.

“I think it was that next week after another committee meeting. That’s when I got the [notification]. You’ve been approved. You’ve passed your home visit. I’m bouncing off walls again. This time I’m at work, and I’m sitting there, and I’m looking at the email on my phone, and I’m just like [shouts with joy]. The entire lunch table was just looking at me. ‘What? What just happened?’ I went from anxious and kinda excited to BOOM! Just oh my god. I made it. It was awesome.”

The final step in the application process is a meeting with the case manager where the partner family chooses house colors and signs the partnership agreement. The process is fully explained again in the meeting, and resources are given to the partner so that they can complete each step. Before attending the meeting, Whitney and her mom visited the NOAHH model home on Montegut to see what kind of home she would be buying at the end of her partnership if she signed the agreement. It only stoked her enthusiasm more.

“We went to the open house. The teal looked so pretty on the house,” she said. “Even looking at the layout—at that point I didn’t know there’s more than one layout for the houses—looking at that house, it was cool. This could be my office, that could be the guest room, and this is the master bedroom here. Just already in my mind. And then we’re just walking through, and every now and then I’d look at mom and say ‘a whole house!’ Pretty much for the next two hours after we left the house, I would just be sitting there in silence, and they’d be having their conversation. Then I’d say ‘a whole house!’ Mom would say, ‘I know!’ We were sitting there saying ‘it won’t be a real house, it’s gonna be some kinda [low quality] type home… We don’t know what kind of house it’s gonna be.’ Then at the open house, it’s like ‘a whole house’! With a kitchen and a laundry room. It’s got everything, even a porch. A whole house! I was losing it for good couple hours.”

She went to her partnership meeting the next week. She picked teal and grey for her house colors and black for her countertops. She Googled for ideas beforehand and picked colors based on what she hoped her kitchen accessories would look like.

“I was a mix of emotions at that meeting” she said. “I was excited, of course, because I’ve been approved, now it’s time to sign paper work, start the partnership, let’s go. But it was more than that. Picking colors was making it a little bit more real, because I’m picking colors for a whole house, for a real house. This isn’t just some hut in the woods. This is a house on a street. We went through this binder full of all of this information, and I still have the binder. Now just every now and then I’m wondering about something. I have to go look up stuff. It’s really convenient, especially when I have to go back and schedule my classes. We read through the whole thing, each page. Every now and then, she asked me to sign an original copy and one in the binder, you keep that. I thought, ‘I think I’m ready for this. I think I can do this.’

“It did help to have [Emily] there. If I had questions, it did help to have her right there, just in case there’s anything I wanted to ask–‘what about this part?’ If I needed any kind of clarification. She was right there; she was ready. That made it a lot easier, but nothing in the papers really made say ‘okay I don’t want to do that.’ Nothing made me turn back. I could do that. We can pull this off.”

She started her hours that next weekend…

St. Charles Lighting is one of our oldest ReStore partners. They have been donating lighting and accessories to the ReStore… END_OF_DOCUMENT_TOKEN_TO_BE_REPLACED